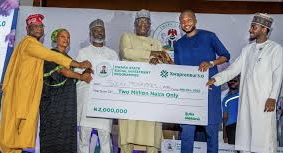 Kwara State has empowered at least 490 small and medium enterprises (SMEs) with varying amounts of non-interest loans under the Kwara State Social Investment Programme (KWASSIP) to grow their enterprises.

According to a statement by the government spokesman, Rafiu Ajakaye, 10 of the 490 young business owners got between N1.5m or N2m each at a symbolic ceremony where the State Governor, AbdulRahman AbdulRazaq, handed them the cheques.

“The winners emerged from a rigorous process involving 15,708 applicants following different layers of screening by jurors drawn from the private sector and public service top players.

“The interest-free loan was given through Kwapreneur 3.0, a third in the series of the youth-focused initiative to support young people to thrive.”

AbdulRazaq said: “This is another success story and a boost for small scale businesses in the state. Our administration will not relent in making Kwara State a better place to live and invest.”

Director General of Kwara State Social Investment Programme (KWASSIP), Abdulquowiy Olododo, said: “Kwapreneur is a non-interest loan scheme that is designed for young entrepreneurs in Kwara State to support new young businesses and help existing businesses to expand. The overall objective of the scheme is to ensure we encourage youth entrepreneurship to create the next generation of Job creators to see that Kwara State becomes a business-driven economy.

“Series of stages have been passed in screening the applications we received based on key criteria to determine the final beneficiaries for Kwapreneur 3.0.