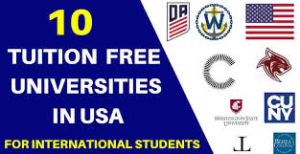 Since fully funded scholarships are limited, students would usually opt for tuition free programs where they can pay very little or no tuition to help reduce their financial burden and at the same time gets the best quality of education.

Since founded in 1855, the Berea college mission is to provide access to quality arts education to international students who would not ordinarily be able to afford a college education. This prestigious university is located in Berea, Kentucky

In the early days of establishment students at campus jobs to support themselves and their families and pay a modest tuition. In 1892, the tuition requirement was removed entirely, and has remained so, since they believe students from average income earning homes can also get educations.

Founded in 1923 by co-founders by journalist Alice Spencer Geddes Lloyd and June Buchanan. Being a tuition-free college, the mission of the Alice Lloyd college is to educate international students for positions of leadership by:

The Webb institute is a private undergraduate engineering college located in Glen cove, New York. At the Webb institute, your education centers on Naval Architecture and Marine Engineering, two dynamic fields that are multi-disciplinary; from ship design and systems engineering to marine engineering, electrical engineering, and civil engineering. All enrolled students are granted a full-tuition scholarship (U.S citizens and permanent residents only). It has a two-months of guaranteed internships every year during study. It is being ranked as one of the best value colleges in the United States.

4.) College of the Ozarks

Founded in 1851, the college of Ozarks (also Columbia college) is a Christian non –tuition liberal art college, the Columbia college offers many courses on location for students who wish to include traditional classroom instruction as part of their degree program. However, students will pursue multiple learning methods which include both online and virtual learning. Because of it work per week policy to qualify for its free tuition, it was nicknamed ‘Hard work U’ because students will have to work 15 hours per week to qualify for its tuition free programs. Columbia college is recognized as a leader in higher education and one of the best online schools because it serves both students online and in residents.  Popular majors in this college include business, teaching, education and criminal justice. It located at 100 Opportunity Ave, Point Lookout, MO 65726, United States

5.) The Curtis Institute of Music

The US service academies are among the tuition free universities in the United States of America if you have interest of joining the US military then you need to try enroll among in any of the 5 united service academies They are:

You will get free tuition, accommodations, amazing training facilities. the program is a 4 years’ free tuition scholarship during this period you are given a monthly stipend in substitution for service.  The application process is lengthily and breath taking it may require:

Deep Spring College, founded in 1917, is recognized as a unique institution of higher education learning. The school education program is built on academics, students self-government, and manual labor. Every year between twelve and fifteen students each receives a full scholarship; the college covers the costs of tuition, room, and board for every student offered admission. In exchange for this, students are needed to submit and dedicate themselves to service to humanity courses offered by this prestigious university includes politics, science, journalism, academics, agriculture, medicine, law, business, and design.

Founded in 1893, Lewis-Clark State College provides a unique and safe learning environment, paying the lowest of tuition for non-resident, students chosen from over 130 degrees and certificates including two- and four-year degrees in both academic and career and technical education fields. It is listed among the states of Washington universities which sometimes offers free tuition. The Lewis Clark university is one of the leaders when it comes to online learning.

The University of Washington is one of the prominent universities in the world ranked no. 7 in a recent university ranking. Founded in November 1861, the university currenlty educates more than 54,000 students annually and it is widely recognized. Thankfully, the University of Washington makes the list of tuition-free universities in the USA for international students owing to its unique tuition-free program. The free tuition waivers are only applied in specific situations for students who meet specific eligibility requirements and do not have formal application processes. It is located in Washington D.C, the country’s capital.

The above-mentioned institutions some of the popular tuition-free universities in the United States which makes tuition-free study available to both domestic and international students. However, there are terms and conditions which must be met specific to each institution. Students are advised to get precise information on tuition-free arrangements of their desired schools directly from the schools in question before taking a leap. Best of luck.

The Deutschland Stipendium Awards for International Students in Germany